The Rocker Chic look was all over the runways for spring 2011 and studs made a move back onto handbags; reminding Fashionistas of the stud trend from roughly five to seven years ago. As we move towards spring and the resort trends are filling up store shelves alongside holiday wears, studs are appearing in full force on shoes.

The studs we are seeing for resort and spring are less hardcore than the ones that were in style several years back. Last time the studded shoe trend was big, the studs were in varying sizes and in some cases quite exaggerated. For spring 2011, and the current resort looks, the studs are smaller and more uniform. Although the stud patterns on handbags appear to be on the understated side, the studs appearing on shoes are more prominent. Instead of lining the seams or creating a small pattern as the studs are doing on handbags, the studs placed on shoes by designers are blanketing the leather and overpowering the fabrication beneath the hardware.

The open toe bootie, which is big for spring 2011, is being covered in small studs. Rock and Republic already has a style on store shelves for resort which is anything but understated.
As strappy sandals begin to fill store shelves for resort, there is a mix between platform soles and the flat sole. Regardless of how high the heel or low the sole, studs are dressing the straps. Valentino, who is known for classic, feminine and understated designs, has adorned a few strappy high heels with gold-tone studs. Burberry is also offering high heeled, studded sandals that are edgy and anything but conservative; a stark move away from the classic trench coat look-yet very London.

Flats are being rocked up with studs for spring as well. Rock and Republic is showing heavily studded ballet flats while Balenciaga offers classic studded flats in seasonal colors and classic colors with either covered hardware or giant silver hardware.

The studded shoe for resort and spring is going to be big. This is a great time to invest in at least one pair of fabulous, rocker chic studs for your toes. You may even try shopping your closet for a few studded soles from the last time this trend was hot. Perhaps there is a pair of studded Jimmy Choos in the back of your closet! Love it! Happy shopping and stay fabulous 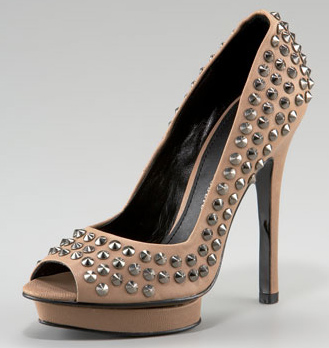