Boots for Fall 2010 are returning to more classic lines, yet still offered a bit of sass to Bay Area Fashionistas who enjoy a great pair of boots for Fall. With the vast array of trends for Fall 2010, boots are staying classic and can be worn with many looks from the 1960’s trend to the 1970’s silhouette to Minimalism to the military trend.

Christian Dior is showing fabulous variations of boots for Fall. Dior modified the over-the-knee boot from the 1960’s go-go era and gave it a motorcycle foot and heel with the neutral, go-with-anything color of soft grey. This boot can kick up a mini-dress giving it an edgy, modern look that tones down the Austin Powers costume effect. Valentino is also offering an over-the-knee boot in a soft taupe with a sweet bow on the side that will blend perfectly with the mini-dress trend of the 1960’s. Christian Louboutin and Giuseppe Zanotti are offering fabulous black over-the-knee boots that will add sass to a Minimalism outfit off all black with a red coat.

The Biker Boot is taking on new life this Fall season in tall boot styles and ankle bootie lengths. Prada is offering a tall, black, hardcore biker boot that slightly slouches when being worn. This boot might be the ultimate casual black boot for Fall. It can be paired with Minimalism looks and casual 1970’s outfits. The Prada biker boots can also be worn for any occasion from lunch with the girls to running to the super market. Of course, leave it to Valentino to create the ultimate, feminine version of the biker boot for Fall. Valentino’s creation gives Bay Area Fashionistas an answer to the Fall lace trend in a casual and wearable boot! Of course there is Dior who gives Fashionistas the luxurious crocodile biker boot in a rich brown. Modified versions of the biker boot include heavily buckled boots such as Brian Atwood’s military suede creation. 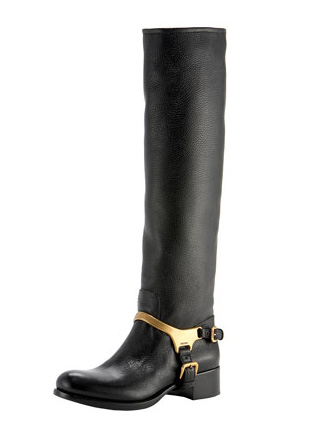 The Military Trend is giving Fashionistas plenty of boots to choose from this Fall. Aside from buckled versions such as Christian Louboutin’s black suede buckled boot, there are boots that encompass the military trend and the green trend all in one. Dior is offering an amazing military, ankle boot in army green and brown.

The Leopard Trend also moved into the boot world and designers made sure animal print addicts had plenty of choices this Fall. Gucci is offering a sexy, ankle bootie in leopard print that will spice up an all-black outfit. Fendi created an animalistic and sparkling boot that can be worn with a 1970’s trousers, short black skirt or a Minimalism outfit. Animal print lovers may just fall in love with Dolce & Gabbana’s leopard print bootie since it offers the animal trend as well as the new shoe sole that is very down to Earth.

Whichever boot trend tickles your toes this Fall, there is a wide array to choose from. The most classic choices have the least amount of embellishments and a heel you feel the most comfortable wearing. Leather always lasts longer than suede and quality counts. The buckle boot trend has come in and out the past few years, if this trend catches your eye you may want to shop your closet! You never know what might be in the back  Happy shopping and stay fabulous.