I tested out Mineral Fusion nail polish in “Amethyst” with two coats of color, one base coat and no top coat. The polish lasted a full eight days before chipping! That is amazing considering I did quite a bit of house cleaning and working out during those eight days. I love a nail polish that lasts so long you can see my nails growing at the base!

“Amethyst” is a beautiful color which offers a deep purple hue combined with sparkles. This is the perfect purple nail polish for transitioning from winter into spring. Purple is an important color in winter 2014, as well as spring 2014, so Mineral Fusion’s “Amethyst” is a great nail polish color for making the transition in seasons. Love that!

Mineral Fusion nail polish in “Amethyst” is priced at $7.99 and can be found online here.

Prints: Prints are still hot! For 2014, look for larger florals, softer colors, graphic prints and statement sprints. 2014 is all about prints, prints, and oh yeah, prints!

Mesh: Mesh detailing was spotted all over the runways for spring 2014. Look for cutouts, trim and details in small to large meshing.

Crop tops: Get going on your ab routine because rock-hard abs are in order for 2014! The crop top has been an emerging trend over the past few years and for 2014 it is hotter than hot. So no excuses, hit the gym!

Sheer details: Look for cut-outs, stripes and other sheer details in every sheer fabric imaginable. Sheer details are being found on everything including tops, skirts, dresses and shoes. Make sure your tan is even!

Florals: Florals did not just appear as prints and patterns on apparel and accessories; florals were shown as 3D details. Look for floral detailing on handbags, shoes and other accessories.

A-line and full skirts: Large, flowing T-Length skirts which could easily use a crinoline underneath dominated the runways. Look for 1950’s inspiration without the poodle dog.

Mini skirts: 1960’s swing is still hot! Look for straight hemlines on dresses and skirts which barely cover what needs to be covered. Please, do everyone a favor and make sure you are wearing full coverage underwear. That’s my two-cents. 😉

Matchy-matchy: Shoes and handbag that match, top/jackets with matching printed bottoms (modern suit-like) are back! Crop tops with matching skirts or pants are also hot. Match it and you’re in like Flynn 😉

Side Slits: Side slits were huge on the runways! Look for double side slits which run almost all the way up the leg on maxi hemlines with a straight silhouette.

Drawstring/bucket bags: The drawstring bag is hotter than hot. It is so hot for 2014, it is on fire! Especially if your drawstring handbag was made by Mansur Gavriel. (Note “IT” bag status). I suggest you run, don’t walk, to purchase a drawstring bag. Now!

Maxi dresses and skirts: While not dominating the runway as in seasons past, the maxi length had its place on the spring 2014 runway. I would not overbuy this length as it seems to be on a downward spiral, but it is still relevant for 2014 and a must-keep.

Studs: Studs and spikes have been huge over the past few seasons. While some designers, such as Rebecca Minkoff, Alexander McQueen, Saint Laurent and Valentino still showed studs for spring/summer 2014, the hardcore rocker chic look is starting to fade. Keep your studs from 2013, but try not to invest in any new hardware for 2014.

Mini Handbags: The mini handbag trend from 2013 is still going strong as we move into 2014. Keep on rockin’ those mini-bags you purchased throughout the year.

Large handbags: The large or over-sized handbag trend is over. 2014 is all about keeping things simple and light. Store your large handbags and use them only for travel; or sell them to raise money for purchasing a fabulous drawstring bag.

Neon: You can put your sunglasses away now, no one will be blinding you with their neon threads. Neon is over. It has gone back to the 1980’s and is now a nostalgic memory. Thank goodness!

Peplum: Peplum is feminine and flattering; unfortunately designers did not show the flirty style on the spring 2014 runways. It is time to store your favorite peplum, sell it or donate it to charity.

Platforms: A few platform shoes can be spotted on store shelves for spring 2014; but that doesn’t make it right. Platforms are over. Done.  Kaput. Sell them unless you love them; if you love them-store them. You can always be a disco queen for Halloween 😉

Pantone announced today that Radiant Orchid is the new color of the year for 2014! Bye-bye Emerald, there is a new hue in town!

It is not surprising that a sweet shade of purple would be the color of 2014. The spring 2014 runways in New York showed us a plethora of blue and purple shades. The blues and purples were in varying hues ranging from pastel to almost bright, yet vivid shades. Radiant Orchid is the perfect shade of purple since it borders lavender yet retains the richness of a soft purple. Love it!

The color of 2014, Radiant Orchid, will play well with almost any shade of blue; as well as blend with other purple or lavender hues. This is definitely a beautiful color to invest in for 2014 as it offers a fresh place on the color wheel after a couple of years of bright and neon colors.

What do you think of Pantone’s color of the year for 2014; Radiant Orchid? Will you be wearing this pretty hue? 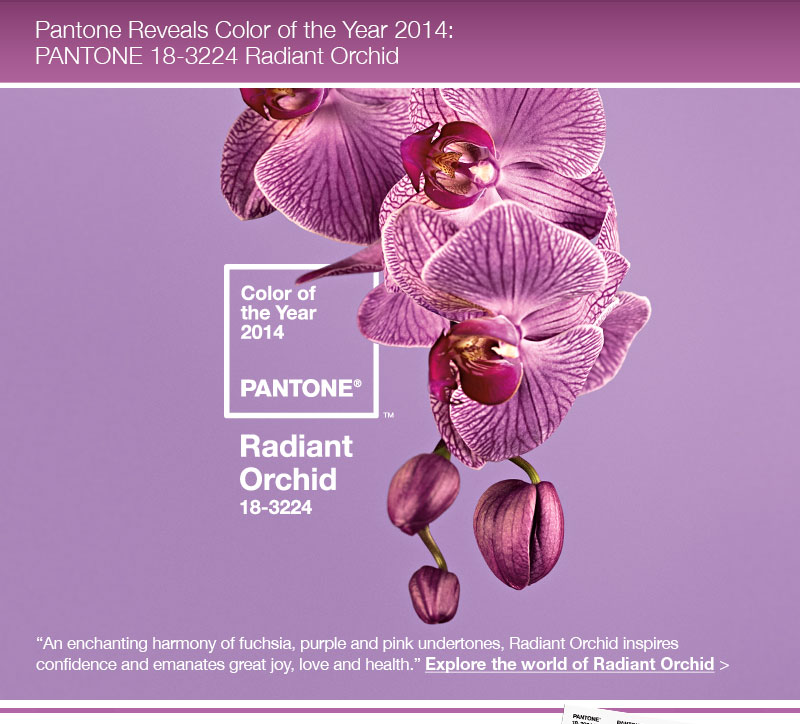