The sun is finally shining here in the San Francisco Bay Area and the temperature has finally hit the level we expect in the Spring. This means the sun is getting brighter and it is time to pull out our fabulous new sunglasses for Summer 2010! Fashionistas in the Bay Area have been spotted wearing two distinct styles of sunglasses, everywhere from the coastline, into the city and east of the bay. The aviator frame has been mildly popular over the past decade and still holds cult status among the stylish set here in the Bay Area. These sporty frames have been spotted in style-savvy pockets of San Francisco such as the Marina, Union Square, SOMA and even along the piers. Designers such as Tom Ford, Gucci, Tory Burch and Chrome Hearts have Aviator Frames front and center for Summer 2010. Unfortunately, Bay Area Fashionistasinterested in getting prescription lenses in an aviator frame might find themselves out of luck. In general, most aviator frame sunglasses are not flat enough for prescription lenses.

Suburban Bay Area Fashionistas have been spotted wearing the other fabulous frame that is hot off the runways for Summer 2010; the oversize resin frame. This playful shape has also been taking center stage over the past few years, but with 2010 the oversize resin frame has steered clear of black and gone into softer neutral shades as well as chambray blue. Miu Miu, Roberto Cavalli, Chanel and Fendi have all shown tortoiseshell and soft browns on their oversized shades. Prada, Barton Perreira and Pucci have shown colors such as blue, chambray blue and pink resin. The gradient lense has also made a comeback,harkening us back to the early 2000’s when gradient lenses were all the rage. Fashionistas in need of prescription sunglasses are in luck with this style. The oversize frame can easily have prescription lenses put in and they can also be done in gradient color.

Although dark black resin frames were not at the forefront this season, black enthusiasts need not worry. Designers such as Chanel and Oliver Peoples have softer black frames that are transparent or not as harsh as traditional dark black. These frames look especially pretty with dark grey gradient lenses or, for the more daring fashionista, purple gradient lenses!

Never let the original lenses on a pair of sunglasses hold back your inner fashion-savvy vision. Even if you are not putting prescription lenses in the frames of your sunglasses, you can still have them changed to suit your mood. This is also a great way to update an older pair of oversized frames. If you have a pair of oversized resin shades from a few years ago, update your look by changing the lenses to a gradient lens. This can be done at many upscale full-service eyewear shops such as Optical Illusions in San Jose onSantana Row. What a great way to save money in this economy! Lenses are less expensive than designer frames in general, so this is one purchase you can feel good about.

Enjoy the sunshine, protect your eyes and Stay Fabulous! 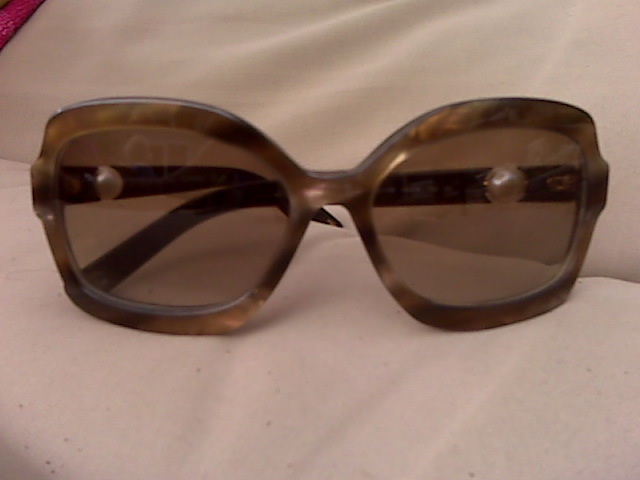