Open toe boots or “booties” as they are often referred to, were hot for fall 2011 and they have stayed on trend for the upcoming fall 2012 season. Open toe boots are a sassy alternative to traditional, classic boots and were spotted all over the runways in Paris, Milan, New York and London; and they have also been spotted dominating the streets.

Open toe boots are a great investment for the fall 2012 season as they are versatile and can be worn with almost any cool weather ensemble. Open toe boots are being shown with trousers and tailored dresses for the office, and jeans or sassy dresses for daytime casual. Open toe boots have also been spotted in glitter, sequins, satin and formal fabrications which make them an edgy alternative to a high heel for cocktail attire.

Although most open toe boots have been shown in classic black, brown or tan, there are eye-catching alternatives out there which include bright colors, suede, leopard print, pony hair and canvas. Whether you decide to rock this trend with a traditional hue or go for a trendier, of-the-moment fabrication such as leopard print, the open toe bootie is a great option for fall and will be more versatile than you may think.

We found a few fabulous open toe boots online for the fall 2012 season and assembled them into the photo sets above and below. Hope you love them! Happy shopping and stay fabulous 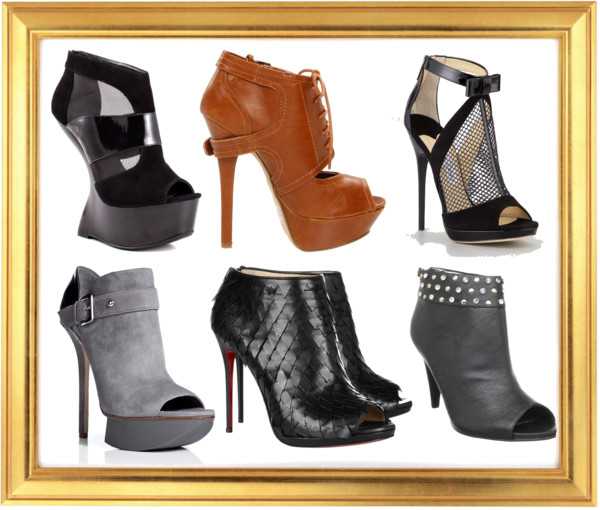