Mondo Guerra took time out of his busy schedule to speak with me about a recent fundraiser in San Francisco for DIFFA where he designed a tabletop installation with ten San Francisco State University students and also to talk about all of the amazing work he does with fellow “Project Runway” alumni Jack Mackenroth. Mondo Guerra is an inspiration and I loved hearing how passionate he is about helping others who suffer from HIV and to also hear his passion about his collection.

Below is a copy of my interview which I originally published on Examiner.com for my Celebrity Charity Events column.
Mondo Guerra was in San Francisco this week to reveal a tabletop installation he designed with the help of ten San Francisco State University interior design students for DIFFA’s “Dining By Design” fundraiser. The well-loved “Project Runway” alum, and upcoming contestant on “Project Runway All Stars,” took some time out of his busy schedule to speak with me today about designing an amazing, one-of-a-kind tabletop installation, and about his tireless work with fellow “Project Runway” alum Jack Mackenroth for “Living Positive By Design.”

Mondo Guerra said “The table I designed represents life, it looks dreary, sad, and its spooky-it’s where life’s journey has taken me. But then in the middle of the table there is a jar vase with a single marigold which symbolizes hope and gives life.” While Mondo Guerra enjoyed taking on the challenge of interior design-especially since the project was for charity, he admitted he felt “out of his element” and also admitted he will not become an interior designer anytime soon; he definitely prefers designing apparel.

Becoming an advocate for HIV/AIDS was a natural move for Mondo Guerra. After coming out on national television during “Project Runway” and telling the world about being HIV positive, Guerra received such a positive response from fans that he felt a responsibility to become an advocate for living healthy and smart with HIV/AIDS.

Before “Project Runway,” Mondo Guerra had not been proactive, or acting responsible enough about monitoring his health and keeping an open dialogue with his doctor. It is easy for people to forget to take their medication, so Mondo Guerra works hard to spread the word that in order to “live the longest time possible and the happiest life possible,” it is important for people to remember to take their medication and to keep an open dialogue with their doctors. Mondo Guerra also reminds everyone how important it is to pay attention to health issues that come with age, such as watching cholesterol levels, bone density and more.

Mondo Guerra has become a role model not only for those who are HIV positive, but for anyone who feels passionate about a cause and would like to become an advocate for the HIV/AIDS cause. When asked what advice he could give an aspiring advocate, Mondo Guerra stated “anything that you are passionate about or that falls into your lap, you should talk about . . . you can get involved by continued conversations, constant dialogue, and by keeping HIV/AIDS on the radar. Talking about something you’re passionate about, that makes an advocate.”

Mondo Guerra has been working extremely hard for the “Living By Design” campaign and he has also been busy filming “Project Runway All Stars” which premieres in January, 2012. Fans of the designers’ collections can expect to see his next line in the fall of 2012. Mondo Guerra also has a new collection of tee-shirts which will debut on his website, lovemondotrasho.com on Friday, November 18, 2011. The new tee-shirts will be special edition and benefit a charity organization in Denver, Colorado.

To learn more about DIFFA or the Bay Area Design Industry Foundation Fighting AIDS, please visitdiffasf.org
*Special THANK YOU to Mondo Guerra for taking time out of his busy schedule to speak with me about the inspirational work he does for HIV/AIDS as well as his life in fashion. 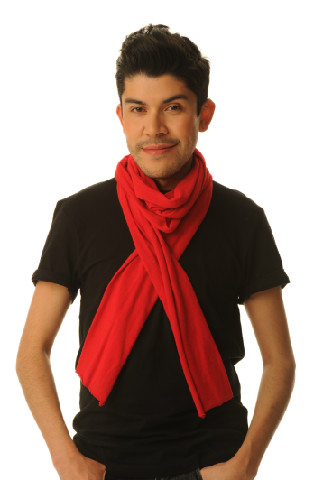