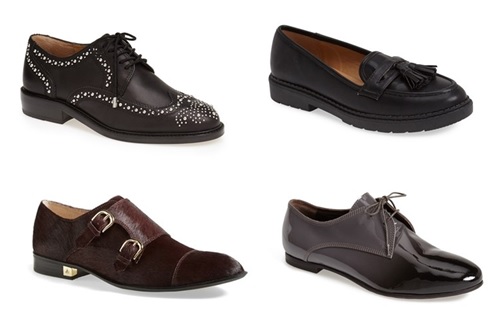 Fall 2014 is underway, and winter 2015 is fast approaching. One of the biggest trends in shoes for the fall/winter 2014/2015 season is menswear inspired footwear. Menswear inspired footwear includes oxfords, loafers, and even penny loafers! The majority of loafers, oxfords, and flats for the fall 2014, and winter 2015 seasons, are being shown in neutral tones with just enough height on the heel to offer extra arch support. Extra arch support = extra comfort. Love that!

Menswear inspired footwear has become incredibly popular on the street for many reasons. Oxfords, flats, and loafers can easily be worn with trousers at the office, with jeans on the weekend, or paired with a skirt for a fashion-forward, funky look. In addition to being versatile, menswear inspired footwear is also comfortable. Oxfords, flats, and loafers are easy to wear all day and they are perfect for standing or walking for extended periods of time. This makes flats, loafers, and oxfords both versatile and practical. Love that! After all, how often can we say something is both on-trend and incredibly comfortable! Not very often. . .

Flats, loafers, and oxfords are also showing no sign of slowing down as we head into the resort 2015 season and the spring 2015 season. Designers are showing dark colors and neutrals on menswear inspired footwear for the fall/winter seasons. While for resort and spring, designers have opted for pastels, light hues, and perforated leather. This shows the menswear inspired trend is going strong, and will make a good investment as move into 2015.

When shopping for flats, oxfords, and loafers this fall 2014 and winter 2015 seasons, look for neutral colors which will transition easily into the new year, as well as for lug soles. Lug soles are staying strong as we move into 2015 and are also fabulous on rain slicked sidewalks or icy pathways.

I found a few amazing oxfords, flats and loafers online which are perfect for now, and into early 2015. You can find them in the shopping widget below! Happy shopping, and stay fabulous 😉