Ever since the television show “Mad Men” made its’ debut, Fashionistas everywhere have been influenced by the 1960’s styles worn on the show. For spring 2013, designers were equally influenced by this era; whether from the show or from other sources, the mod look of the 1960’s dominated the runways.

The Mod look was everywhere on the runways in the form of short, swinging hemlines to A-line skirts. The patterns were bold and geometric; taking color blocking into purposeful organization. There were cubes, wide stripes and dizzying prints which took onlookers back to the “Go-Go” days.

The bright color palate combined with the Mod prints has created a modern day 1960’s style which is hitting the streets as we speak. Consumers responded to this runway trend and Fashionistas on the street have been spotted not only wearing the clothing, structured satchels and kitten heels of the era, but wearing <gasp> beehive hairdos! Yes, that is correct! The beehive is making a bee-line for the street, and as shoes go down, hair is going up!

The Mod look is lighthearted and fun; making this a great trend for the uplifting season of spring. As blossoms bloom and flowers attract our eyes, the sun is shining; so why not shine in your wardrobe!

Look for bold stripes, bright colors blocked with white and structured small satchels. This look also does NOT work with platforms. For a true Mod look, seek out a heel height which is 3” or lower; kitten heels are perfect if you don’t mind the short heel. The Mod look can even be worn with flats! There will be some happy feet this season! Love that! 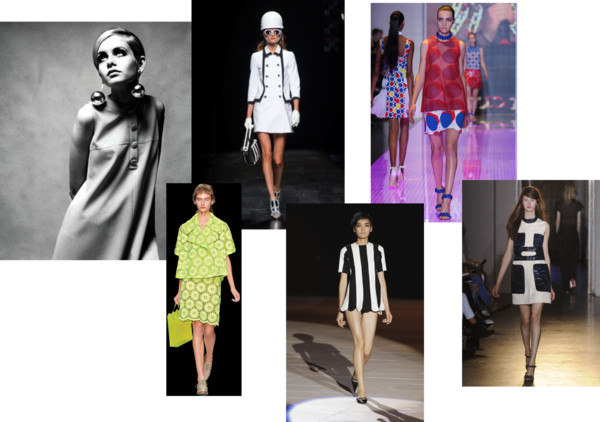