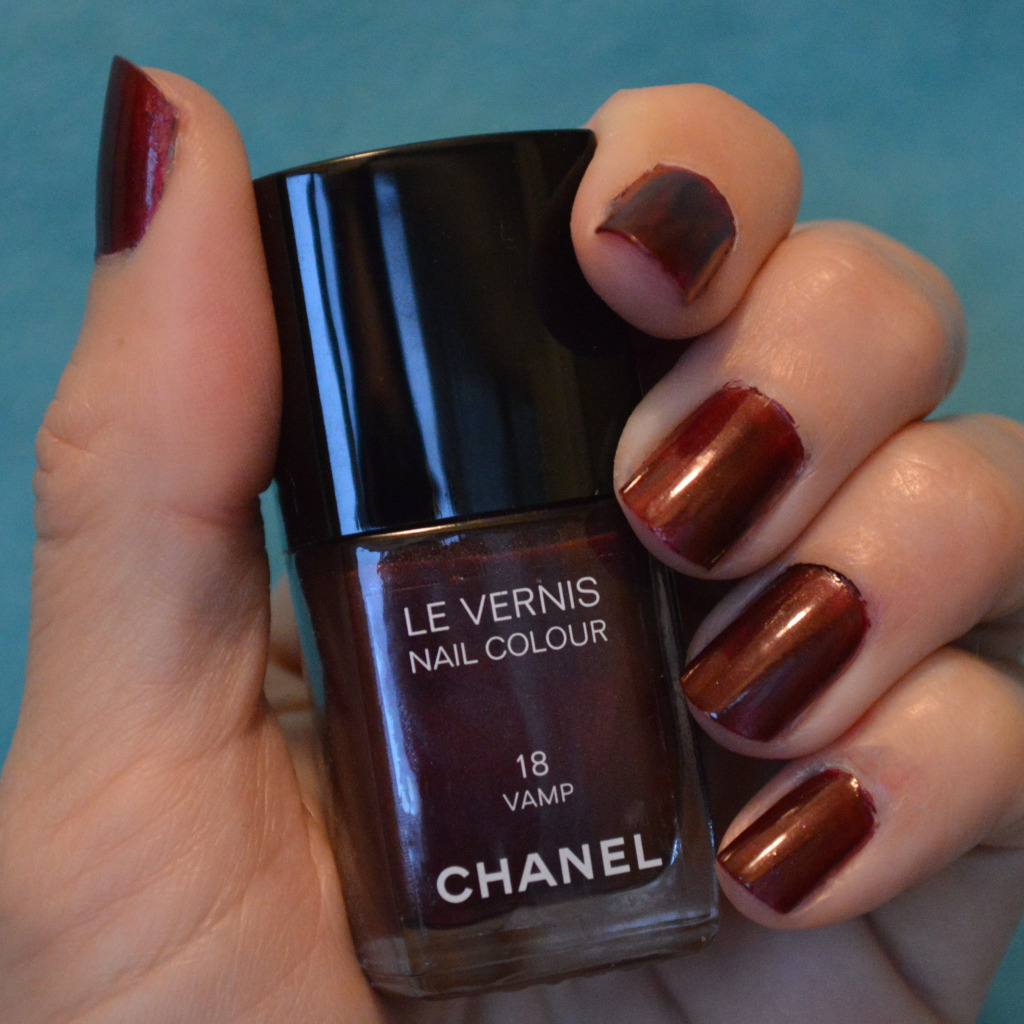 Fast forward to the 2014 holiday season. Chanel is re-promoting Vamp for the holiday season alongside Phenix. As nail polish fans are reminded of the beauty that is Chanel Vamp, the classic nail polish color is starting to fly off store shelves once again. Chanel Vamp is also a good companion color to 2015’s color of the year, Marsala. Vamp is a darker hue than Marsala, but the two colors blend well together, making Vamp an easy color to wear as we move into the new year.

I remember when Chanel Vamp first came out in the 1990’s. I went to the Saks Fifth Avenue Chanel counter on Union Square to buy a new bottle of my favorite nail polish at the time; Raspberry. The Chanel  nail polish I had been wearing was a beautiful red hue similar to a raspberry. It had sparkles and I loved, loved, loved it! When I went to the Chanel counter to buy a new bottle, since I had used up my old one, I was informed it had been limited edition and was no longer available. I was crushed! There I was, in my early 20’s, already a victim of the dreaded “limited edition” curse. The curse happens when you fall in love with a Chanel beauty product only to find you can never re-purchase it because it was limited edition and will never exist ever again! Curses.

The Chanel representative at Saks Fifth Avenue informed me there was a new nail polish color and she had one bottle left; ONE BOTTLE LEFT! It was Vamp. She told me this was the hot new nail polish color from Chanel. It looked so dark in the bottle to me. In the 1990’s, nail polish was light and playful; never serious or dark. So, when Vamp first came out, it’s darkness was downright shocking! Since I was used to lighter nail polish colors, I passed on Vamp and chose a pink hued nail polish. What a mistake I made!

A few days later I decided to give Vamp a go. I returned to Saks Fifth Avenue only to learn that last bottle had been sold moments after I left a few days before. I walked to the other side of Union Square and tried to find Vamp at Macy’s and Neiman Marcus. Both Chanel counters informed me they sold out the day they had received Vamp. I was put on the waiting list. Unfortunately, the waiting list was am mile long and I never did get my hands on that coveted bottle of Vamp. Lesson learned, never pass up the last bottle of Chanel nail polish!

Now that Chanel is showing Vamp for the holiday 2014 season alongside Phenix, I decided it was my turn to test out Vamp; all these years later! I tested out Vamp with two coats of color and one base coat. I definitely missed out on Vamp back in the 1990’s. Why oh why did I pass up that bottle!?!? I love Chanel Vamp! This nail polish is a beautiful, deep burgundy; and when compared to the dark, almost black nail polish hues we have been enjoying over the past few years, it looks light in comparison!

If you would like to get your hands on one of Chanel’s most coveted nail polish hues of all-time, Chanel Vamp can be found online here and here. And yes, it is already sold out at some stores. The Vamp frenzy returns!