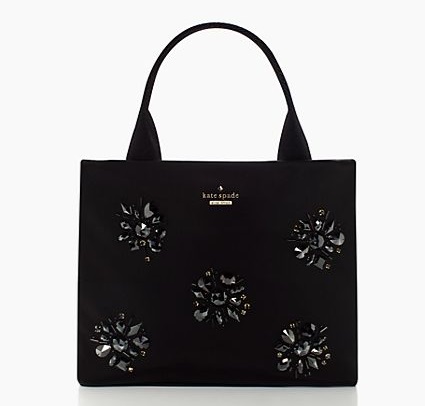 Kate Spade first became famous in the mid-1990’s when her beloved nylon mini tote hit the handbag scene. Handbag fans and Fashionistas everywhere ran out to purchase their very own Kate Spade mini tote; making the tote hard to come by! The tote appeared on the forearm of every woman on the street. Although Kate Spade’s tote was popular and worn by many women, very few of these Kate Spade handbags looked exactly alike. The small tote came in a variety of colors and patterns, making it as unique the next “IT” bag after the Kate Spade tote; the Fendi Baguette.

The Kate Spade “IT” bag of the mid-1990’s was coveted by almost every woman on the street. In fact, counterfeiters soon caught on to the trend and inauthentic versions of the ultimate small tote were popping up on the forearm’s of unscrupulous women on the street. This was disconcerting to see, the pretenders were easy to spot, and showed the poor ethics of the wearer.

For the holiday 2014 season, Kate Spade has brought back a version of her famous small tote and it is nothing short of fabulous! This beautiful rendition of Kate Spade’s ultimate “IT” bag is made from a beautiful black nylon which holds up in the rain. The tote is embellished in sparkling jewels making it ideal for the holiday season as well as an evening investment. This new tote from Kate Spade can easily be worn for many years to come as an evening tote with sophisticated casual attire through to semi-formal wear. Love that!

One of the reason’s Kate Spade’s nylon totes became so highly sought-after in the mid-1990’s was due to the fact that they offered extraordinary quality. I owned a black one which I wore everyday. I lived and worked in San Francisco at the time and used the tote for work. I stuffed it full of everything I needed for myself and work. I took the tote with me everyday on BART and Muni. The tote was caught in the rain, subjected to daily fog, and who knows what wars it went though on public transit! The tote survived, and always looked new. I wish I still owned it today; unfortunately my Mom took it from me! Roughly fifteen years later, my Mom uses the tote bag and it looks amazing!

Hopefully this is a sign of things to come. It would be amazing if Kate Spade continued to release this beautiful yet practical handbag every season in new colors and prints. It is a classic style and something every Fashionista should have in his/her closet. Do you remember when Kate Spade’s small tote was the “IT” bag in the mid-1990’s? If so, did you own one?

2 thoughts on “Kate Spade brings back her classic mini tote”