Reese Witherspoon looked amazing at the 71st annual Golden Globe Awards on January 12, 2014. Her skin was flawless and, as always, her entire look was chic and sophisticated. Makeup artist Mai Quynh designed the beauty look on Reese Witherspoon for the Golden Globe and it was nothing short of amazing!

If you would like to re-create this flawless and fabulous look at home, you can! Thanks to Laura Mercier, who provided the following step-by-step instructions, along with product information, to re-create Reese Witherspoon’s beauty look from the Golden Globe Awards, we can get this look at home! Love this!

Makeup artist Mai Quynh created a modern and warm look for Reese Witherspoon, who was a presenter at the 71st Annual Golden Globes. Quynh was inspired by the viridian color of Witherspoon’s Calvin Klein dress, as well as her golden complexion. 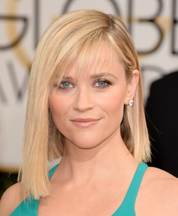 2) She then applied NEW Laura Mercier Smooth Finish Flawless Fluide Foundation (COMING FALL 2014) using a BeautyBlender Sponge. She stated, “I love how the natural, matte texture of this foundation melts into the skin, leaving it smooth and flawless.”

EYES: Bright, sultry eyes were the main focus of the look

1) First, Quynh mixed Laura Mercier Caviar Stick Eye Colours in Sand Glow and Cocoa, ($26/each) and applied the color from the inside of her eyelid, blending it towards the outer lid.