Pull those fabulous Manolo Blahnik Mary Jane’s out of the back of your closet, because it is not just the Mary Jane making a comeback this fall; the pointed toe is back for fall 2012. After a few years on hiatus, pointed toe shoes are making a huge comeback for the fall/winter 2012/2013 season. This isn’t to say that almond toe’s and square toes are on their way out, there seems to be plenty of room for all toe shapes this upcoming cool weather season.

The pointed toe has been making a brief appearance over the past two seasons; almost as if the toe shape has been testing the waters of the marketplace. As platforms have been joined on store shelves with flat soled shoes, the pointed toe has been able to make an easier resurgence and has quickly been gaining popularity among Fashionistas.

The pointed toe is traditionally found on flat soled shoes. While a few shoe designers such as Brian Atwood, Prada and Christian Louboutin have added small platforms, which are under a half inch, to pointed toe pumps, the majority of pointed toe shoes have been popping up with the traditional flat sole; another sign that shoes are slowing making their way back to the ground.

Pointed toe shoes are being shown in many styles for the fall 2012 seasons. The pointed toe has been popping up on flats, pumps, sandals, booties, boots, cap toed pumps, loafer pumps and formal poie de soie shoes. In fact, fall 2012’s embellishment trend has also been spotted on pointed toe shoes, allowing the style to find itself encrusted with crystals, rock n’ roll studs and more.

The pointed toe shoe has its pros and cons. The pros being that the style fades in and out of fashion every few seasons, making the shoe a good investment when purchased in classic materials and colors. Pointed toes can also slim down a wide foot.

The cons to the pointed toe shoe include fit and the fact that although slimming, they do make large feet look longer than they actually are. Many shoe fans find themselves going up a half size in pointed toe shoes since the toe box tends to be narrow and can easily pinch the toes. Something to keep in mind if ordering a pair of pointed toe shoes off the Internet or from a catalog.

Since the pointed toe shoe trend is fabulous for fall 2012, we found a few amazing styles online and assembled them into the Polyvore set below. Hope you love it! Happy shopping and stay fabulous 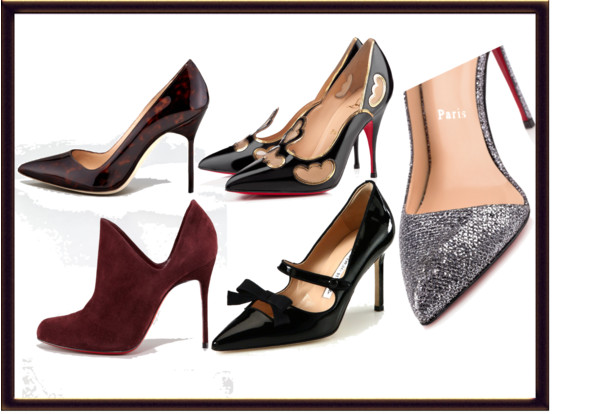