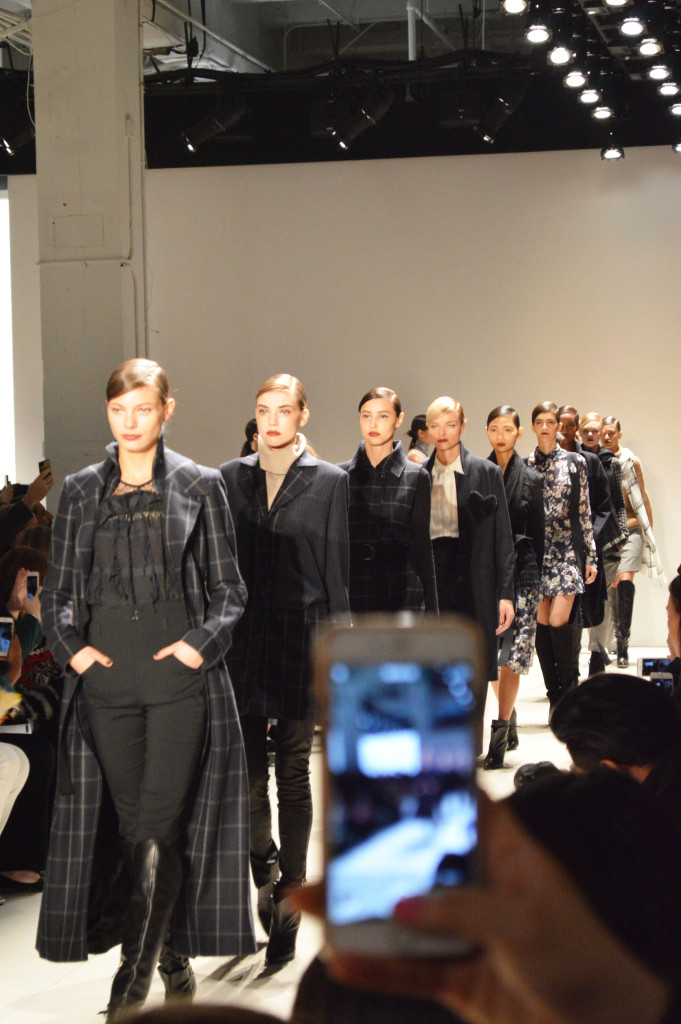 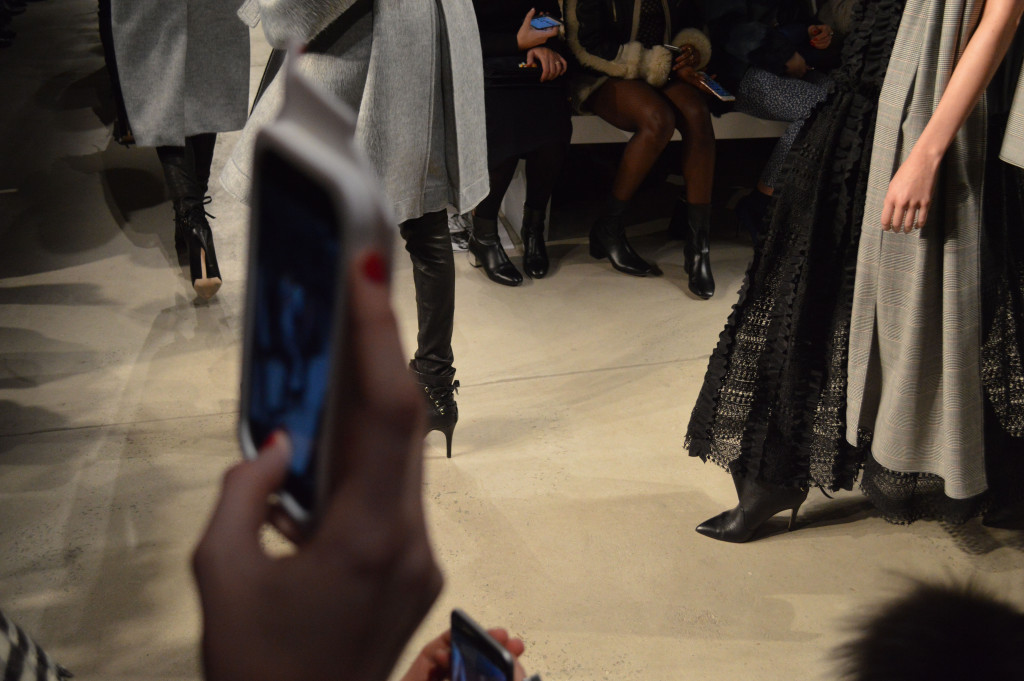 Blocked by a cell phone! Sometimes you have the perfect shot on your camera, and just as you go and snap it, someone to the side of you, or in front of you, shoots their phone in the air and blocks your shot. This was my one shot of the fabulous black boots on Marissa Webb’s runway, ruined by the woman sitting next to me and her hand. Things that make you go grrrrrrr. 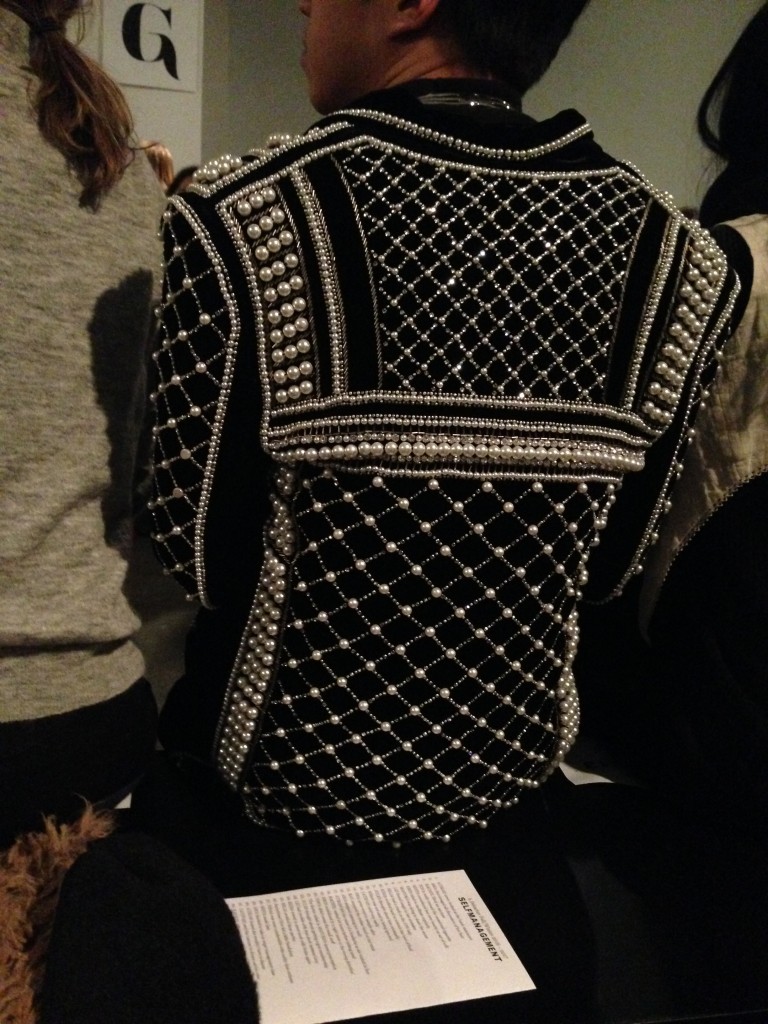 Often the second row bench is not elevated. So, instead of seeing the runway, you see heads or backs. This was the fabulous back of the jacket worn by the gentleman sitting in front of me at A Detacher. I had a great second row seat, but I could barely see. Oh well, at least I witnessed the amazing beadwork on this man’s jacket. 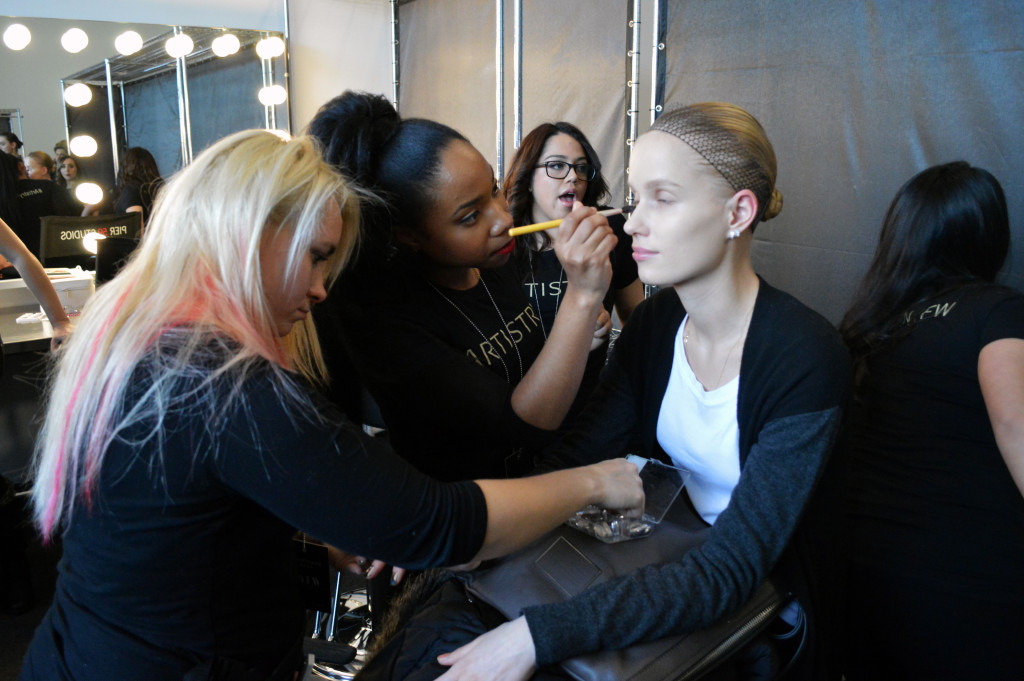 The backstage scene at a fashion show is nothing short of chaos. I watched as it took a village to get this model runway-ready backstage at Pamella Roland. She was fussed over by multiple people at one time; not to mention the gaggle of cameras snapping her picture. I guess I am guilty of the latter. 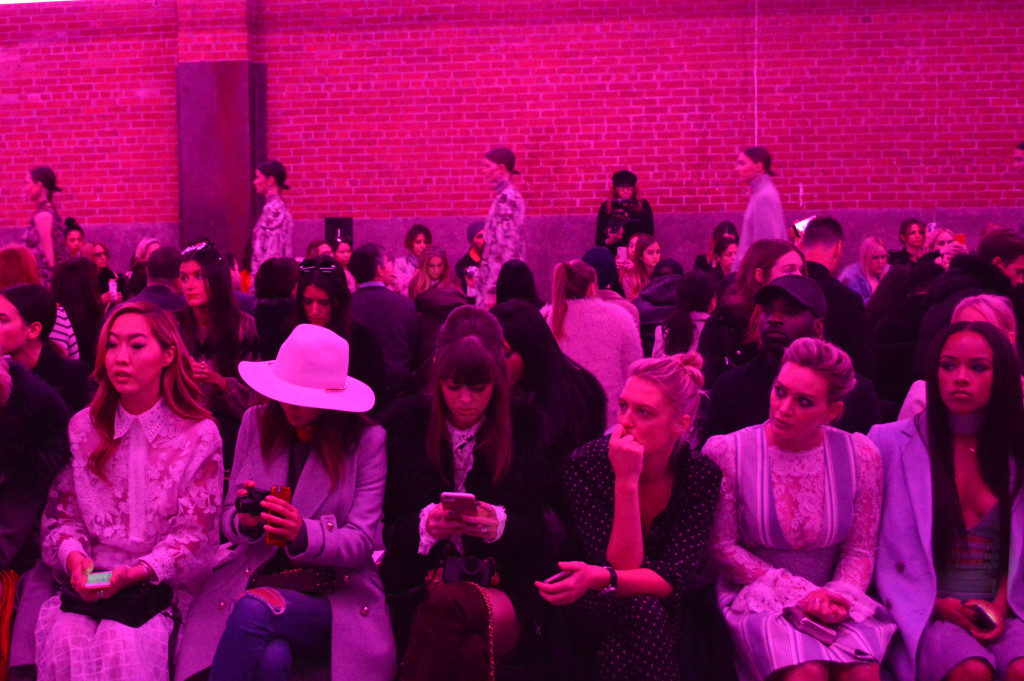 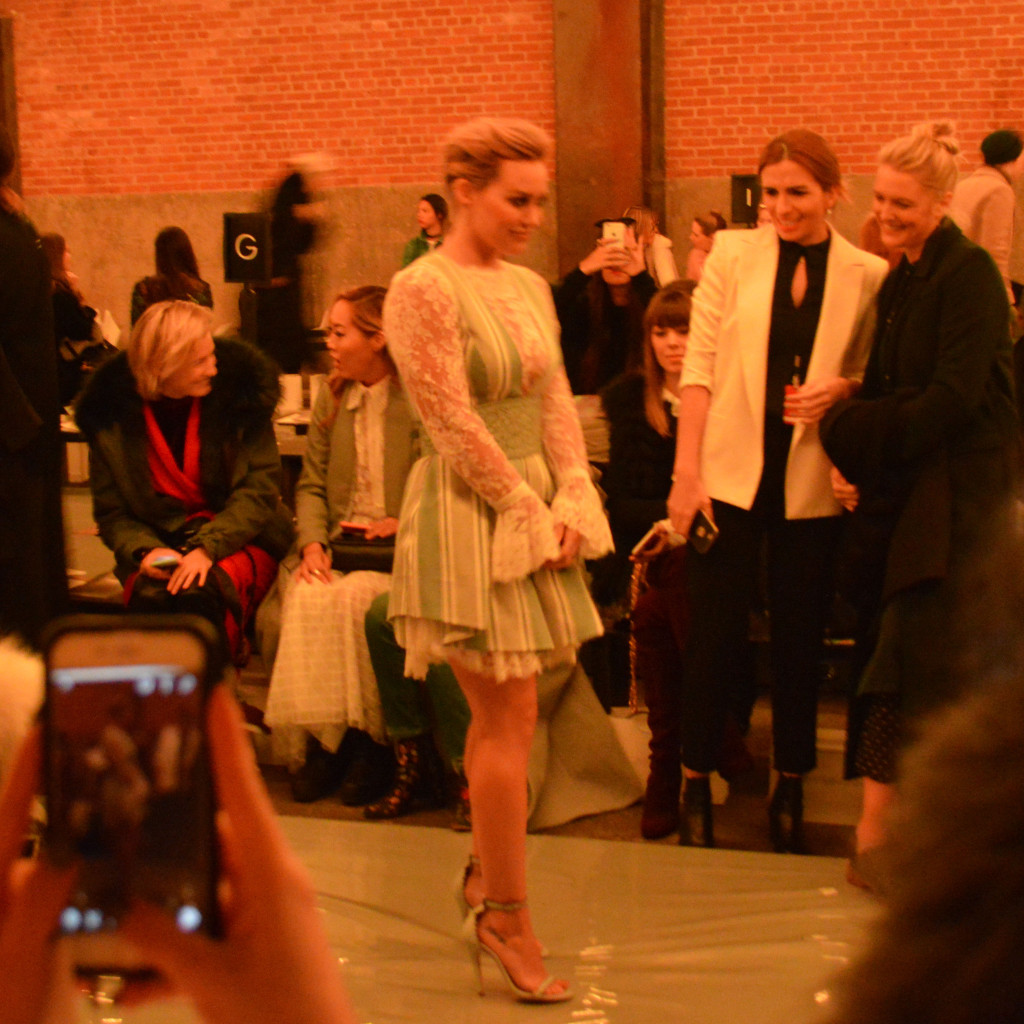 Celebrities can be spotted all over New York Fashion Week. At the Zimmermann show, Hilary Duff was sophisticated, and relaxed, in a spring dress; despite the twenty degree temperatures outside. How did she look so comfortable? I was freezing; wearing a coat and snow hat. Props to Hillary for not being cold!

There is usually a sheet of paper placed on each seat before the shows. This paper offers the designer’s inspiration, and a run of show. I always arrive early enough to have time to read over the sheet, and see what inspired the designer this season. This photo was taken at my seat prior to Marcel Ostertag’s show. His collection was fabulous, by the way. 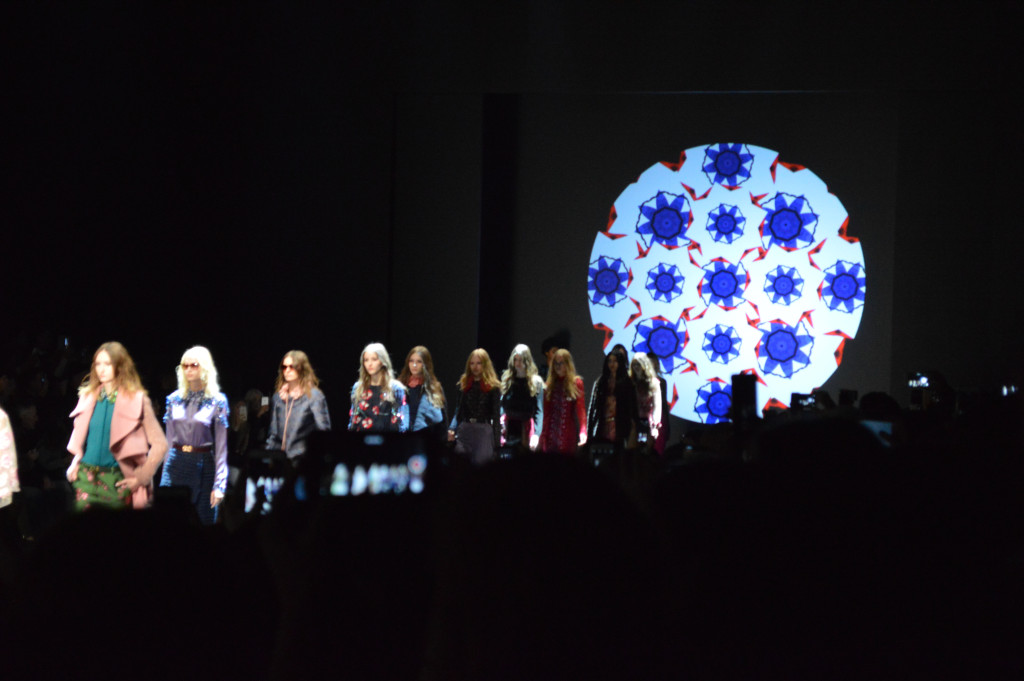 For the fall 2016 shows, about 75% of my invitations had an assigned seat ranging from front row, to last row. The other 25% of my invitations were standing room. This shot was taken from my 4th row, assigned seat at Monique Lhuillier. Although in person I could see the amazing details and colors on each look, on camera, the runway looks far away. This is what the final walk looked like through my lens. And yes, I cannot see any feet. 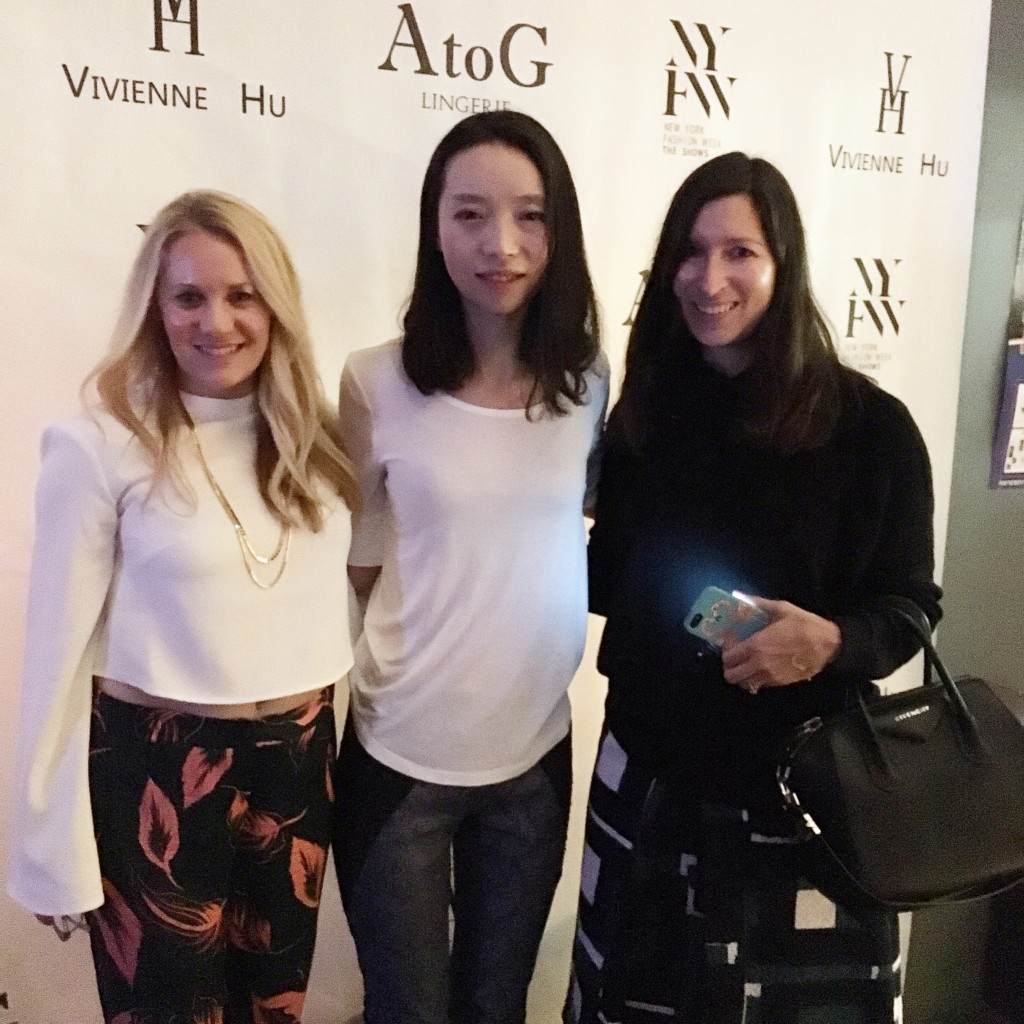 The last event I attended at New York Fashion Week was Vivienne Hu’s after-party. We celebrated her amazing collection, and her collaboration with AtoG Lingerie. This photo was taken towards the end of the night. The after parties are very fabulous at fashion week. It is when you have a chance to speak with the designer about his or her collection, while he or she is relaxed since the show is done. If you ever receive an after party invite, GO! It is the best time to speak with the designer, and celebrate his or her hard work.

Well, that’s a wrap! These are a few snaps of my view behind the scenes at New York Fashion Week fall 2016 experience. I hope you enjoy them!