One of the many jewelry trends for fall 2012 is the cameo. With the statement jewelry trend from the past two years still being at the forefront of runway fashion and street style, and the new vintage jewelry trend for fall, the cameo has turned up as the perfect way to fuse the two together.

Designers and brands such as Lanvin, Twisted Silver and Alexander McQueen have created both bold cameo designs as well as feminine, sweet cameos which are statement making and can also become a signature piece. While Lanvin and Twisted Silver have opted for traditional cameos for fall 2012, Alexander McQueen has created the skull cameo; would you expect anything else from McQueen?

Cameo jewelry for fall 2012 is being shown in both small versions as well as large, bold, statement making pieces. Since this is an emerging trend, the fall 2012 season is the perfect time to pick up a cameo piece.

Cameo jewelry works well with vintage inspired ensembles and is a great way to add femininity to the menswear trend; or add some edge with a skull cameo.  Cameos are considered a statement piece, whether the cameo itself is large or small. A cameo necklace, bracelet or pair of earrings should be worn with understated jewelry; or worn alone. Cameos can be paired together for fall 2012 if the cameos are small and made from the same material; and do not compete with each other. As in this photo from Twisted Silver’s fall 2012 collection. 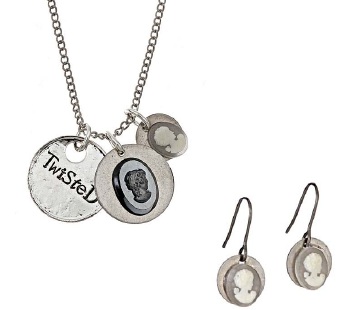