Designers included small studs in both gold and silver on the spring runways for 2011. The studs appeared mainly on accessories such as handbags, shoes, gloves and cuffs. The studded handbags from a few years back were heavily studded and included large hardware on the straps. For spring 2011 the studs are more minimal; being shown as trim around the edges of handbags.

The Rocker Chic footwear for spring 2011 included motorcycle style boots; both ankle and knee high. The boots include studs, buckles and zipper-like details as well as other, small metal embellishments.

Rocker Chic is a trend which is not being done head-to-toe for spring 2011. The look is to be understated with one or two hardcore pieces mixed together with basics or minimalist pieces. You can pair studded footwear with Levi’s and a tee-shirt or a motorcycle jacket over a soft sundress with classic sandals. You may want to look for one or two pieces of this trend that catch your eye such as a handbag or fabulous pair of boots, and then mix the items in with the rest of your wardrobe.

This is one trend that can easily be found in many Fashionistas closet’s. Since the Rocker Chic trend was around just about three to four years ago, many fashion savvy shoppers have motorcycle boots and black leather tucked away in their closets. Also, Balenciaga lovers will be right on trend with their BBags in any style of hardware.

The Rocker Chic trend can easily be found on store shelves right now, making it one of spring’s trends that can be jump started right now. Nine West currently has fabulous ankle booties with studs for fall which can be worn now throughout 2011; after all, the ankle bootie is a huge shoe trend for spring 2011 too! In fact, the Nine West collection for fall includes multiple rocker chic pieces which can easily carry you into fall, and the prices are not too shocking on the wallet  Happy Shopping and stay fabulous 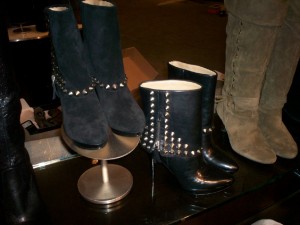