Raise your hand if you remember wearing everything rainbow as a kid? My hand is so far up! When I was little, rainbows were everywhere. I had a rainbow tee-shirt I used to wear all the time with blue track shorts. I remember one of my teachers had sandals which resembled modern-day Tevo’s. They had two fabric straps with a rainbow pattern. All of the kids in our class loved her shoes and always wanted to wear them, after all, rainbows were all the rage!

There is something inherently 1970s about rainbows. They remind me of long, straight hair and acoustic guitar. Rainbows bring me back to a time when hippies were everywhere, and colors were celebrated. Of course, I did grow up in Marin, so there may have been a disproportionate amount of hippies running around. haha

We only had twelve television stations with cable. That’s right, only twelve! If you wanted to change the channel, you had to stand up and turn the dial. That’s right, turn the dial! There weren’t any buttons, only two dials; one for the stations and one for UHF. The main dial went up to thirteen, you know, in case the powers that be added a station past twelve. Since we had cable, we never used the UHF dial. I’m not sure what it did, but I do know you needed rabbit ears to use it. Pop quiz; do you know what rabbit ears are?

On the car door, inside the car, there was a crank for opening and closing the windows. There was a gas crisis when I was in pre-school, so we had to wait in line to get gas for the car; and sometimes the gas stations ran out of gas, which meant you were basically out of luck-and gas!

There was a huge drought, and I still remember the huge pipe that went across the Richmond-San Rafael bridge. It carried water over the bay to help out the East Bay which was shorter on water then we were. Water rationing was so severe, we ate off paper plates and used paper cups to drink. We had an insert in the bathtub so that baths used less water. It was crazier then any drought the bay area has had since!

In the days of rainbow fashion, everyone drove a really big car. In fact, almost all the moms drove a giant station wagon with wooden side panels. My mom was an outlier with her BMW 320i. It was tiny in comparison, and we got a little bit of teasing for not driving an American car. Oh yes, even driving Basic Marin Wheels at that time was not the norm; like it is now in Marin! Haha

So while the world was not automatic, and American cars were king, we were all running around wearing rainbows. Fast forward to modern day, and I have to search for an American car on the road; but I see rainbows everywhere! How can you not?! Everyone has some form of rainbow on their person for summer 2018. Whether it’s rainbow striped dresses, an article of clothing, a pair of shoes, a handbag, or a piece of jewelry; rainbows are dominating the landscape. It’s the 1970s trend that has not seen daylight since, well, the 1970s! Welcome back!

I really want to wear the rainbow trend this season. The only hesitation I have is that rainbows are a memory for me. They bring me back to a simpler time. Rainbows are a favorite childhood sartorial memory for me, so to think of wearing them again seems strange, almost costume-like to me. While I would normally think this is a trend to start small on, I am leaning towards getting a skirt or dress with rainbow stripes for the summer season. Why not go all in?

Shop rainbow fashion around the web:

What do you think of the rainbow trend? Does it bring back memories for you? Or, is the first time you are experiencing rainbows in fashion?

Pictured below: rainbow jacket from the Concept Korea runway at New York Fashion Week for fall/winter 2018/19 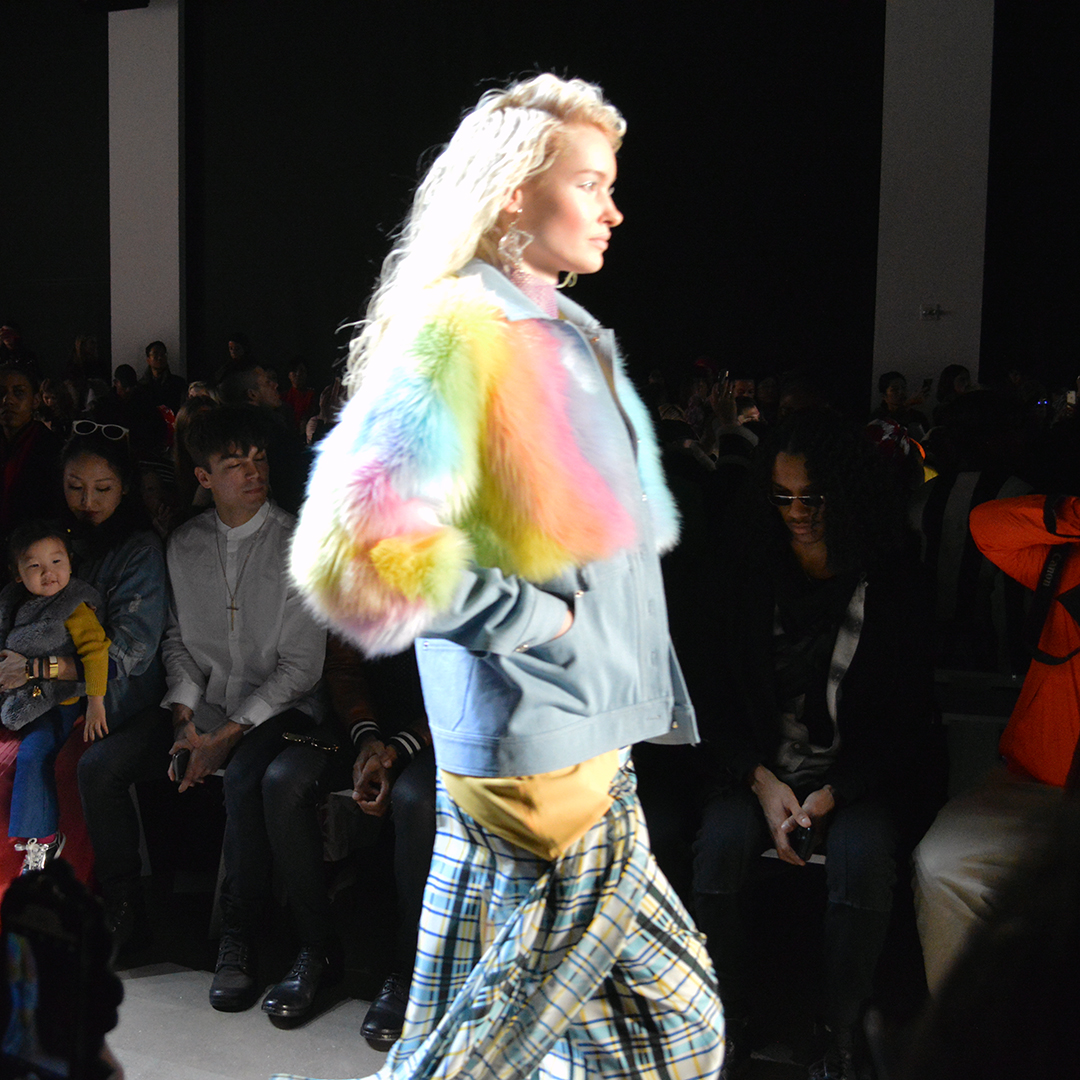