The Golden Gate Bridge is celebrating 75 years this weekend. I remember when the bridge celebrated its’ 50th anniversary and many of my friends walked across the bridge and had fabulous tales to tell about the middle of the span flattening out. The stories and photos were amazing; making the rest of us wish we had gone too.

The Golden Gate Bridge is a local icon which also served as my lifeline to San Francisco. Growing up in Marin, the city was where we played. We went to the Opera, the Ballet, the Symphony and of course Union Square.

As I grew up, the bridge became an adventure. As a sixteen year old, it was a little scary to navigate while driving, but by the time I was ready to start my undergraduate days at the University of San Francisco, navigating the bridge had become old hat and actually fun.

It is interesting to think about all of the discussions in the Bay Area we have had throughout the years about the Golden Gate Bridge. In the 1990’s, years of fatal accidents caused a discussion about installing a movable jersey barrier on the bridge. This idea eventually faded and today we still have little yellow sticks which are moved to help the flow of traffic during peak hours. There had even been talk about building a new span alongside the bridge in the 1990’s in order to help the flow the traffic. Thankfully, this idea was tabled. Can you imagine a modern bridge next to the beautiful Golden Gate with traffic going in the opposite direction? Weird.

I remember when the toll was only $1, and my Mother remembers the toll being a mere twenty-five cents. As the toll started to rise over the years, I remember being in many lively discussions about how awful the rise in price was.

When FastTrak came out, it was the most amazing invention since sliced bread. We no longer had to wait in line for ten minutes with all of the tourists to pay an astronomical toll. FastTrak almost makes the $5 toll not so painful.

As an adult, the Golden Gate Bridge is a source of fun for my children anytime we cross it. They love how the fog rolls around the towers and they love the view of the ocean and the Bay Area.

Here’s to the most beautiful bridge in the world. It has been a fabulous 75 years, and we are all looking forward to 75 more years of breathtaking beauty. 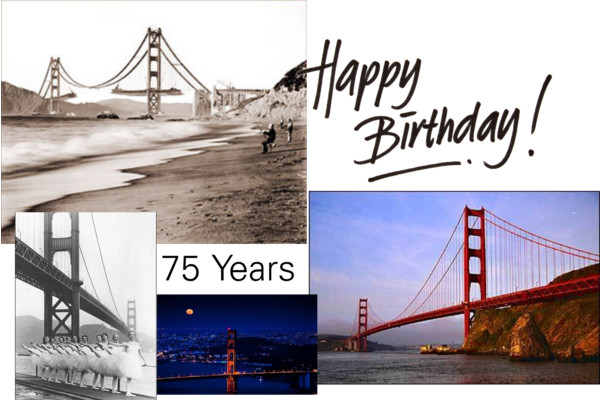